A rural surgeon in Assam, an urologist by training has come up with an ingenious way of making up for his lack of expertise fixing complex fractures by internal fixation. He opens up the fracture site, then calls in the local carpenter whom he has taught the basics of surgical sepsis. The carpenter is quite adept at using standard orthopaedic drills, screws, metal plates, bolts and nuts to repair bones just as if they were delicate pieces of furniture. The urologist then repairs any vascular or nerve injuries and closes up. I guess the results would be comparable to that of the average Ortho registrar with only a few surgeries under his belt and in the absence of tertiary level orthopaedic care far better than leaving such cases untouched.
Posted by Lalit Narayan at 11:11 PM No comments: Links to this post

Another interesting presentation at ARSICON 2007 was one by Dr. Meenakshi Gautham on her study on the treatment of reproductive tract infections by informal medical practioners in the Tehri Gharwal region. I won’t attempt to summarise her findings here. I will only concentrate on the finding that almost all the practioners had no concept of the infectious etiology of urethral and vaginal discharge yet almost all prescribed antibiotics for such symptoms. When the actual rate of infection was calculated among symptomatic patients who were prescribed antibiotics it was found to be quite low (3-5% if I remember right). Most patients who got antibiotics did not need them.

These practioners were using a different theoretical framework, a traditional humoral understanding of the body to explain their patient’s symptoms. However they then proceeded to use antibiotics which have been developed using a modern biomedical framework. Since a formal medical education was inaccessible to them due to reason of money and language they had no means understanding this biomedical framework and this in turn made their prescription practice excessive and dangerous. Although it was not brought out in the study, they were possibly also aware of the fact that prescribing more antibiotics meant more profits and more incentives from pharmaceutical reps.

The traditional humoral understanding of the body is common sense knowledge in the region where they lived and worked. Most informal medical practioners learn what drugs to prescribe by careful observation of other doctors and it is hence not unnatural that they attempt to fit such observations into the theoretical framework in which is most familiar to them. They invest antibiotics which properties of ‘heat’ and ‘cold’ just like traditional medicines.

What I found interesting was the parallels that can be drawn between such a scenario and that of doctors writing health policy at state and national level. A large number of doctors in government committees are super-specialist clinicians with years of experience operating within the modern biomedical framework. Modern medical education ensures that even those who have spent years seeing patients from poorer, rural communities have no theoretical basis for understanding the social, cultural, economic and political realities of their patients. Those with post graduate degrees in Community Medicine don’t fare much better. It is quite likely that the surgeon mentioned in my previous blog entry might sit on a committee looking into ‘Tribal Health in ’.

Most assumptions on which policy is then based stem from common sense and years of observation. We have already seen how this can be a dangerous practice, since a large number of observations do not automatically mean that one has even begun to understand even the basics of the underlying phenomena. Indeed the resultant policy prescriptions produce results that seem similar to those of informal practioners. A lot of money gets spent, a few people get better and a large majority remain as they are.

If we are to ensure that policy decisions are made on rational grounds then we need to ensure that those making such decisions have both a deep theoretical and practical understanding of the social and political reality they are attempting to affect. Given the choice we would not entrust our bodies to a surgeon if we realised that he either didn’t have the necessary theoretical understanding of the human body or the requisite amount of practical experience. Policy interventions which affect the lives of millions of people deserve no less.
Posted by Lalit Narayan at 6:02 PM No comments: Links to this post

I recently attended ARSICON 2007, the annual conference of a dedicated group of rural surgeons in who form the Association of Rural Surgeons of India. The association is probably the only group of clinicians I have known who deeply and pragmatically care about the spiraling costs and increasing inaccessibility of basic surgical and medical care in . For someone who spent five years as an undergraduate becoming increasing disillusioned with the rampant commercialisation at my Catholic institution their company was indeed uplifting.

Over three days I watched videos of extraordinary surgery aimed at minimalising costs for the patient, listened to a number of experienced speakers and generally became more absorbed in the art of surgery than at any given time during my years at medical college.

There was only one presentation that got a standing ovation and it is this presentation that disturbed me the most. A senior surgeon attempted to sum up ‘Tribal Health in ’ by presenting a few pictures of semi-clad forest dwellers, marsamic children and bloody bear attacks. All the pictures were 20 years old and in quite a few the person displaying tribal weapons was another rural surgeon, a fact that was not mentioned anywhere in the presentation. Tribals were portrayed as having ’No gods, no religion and only superstitious beliefs.’ No where was the actual name of the tribe portrayed mentioned. There were no statistics, no indication as to the reasons why tribal communities have been denied access to modern health care.. Scheduled Tribes constitute around 7% of the Indian population and actually are an extremely heterogeneous group. Such an incredibly simplistic representation did them an injustice to say the least.

What concerns me is that barring one or two surgeons, not a single person picked up the fact that the picture painted was crude and inaccurate. Here was a group of people who were not safely cocooned in an elite urban clinical practice yet after all their years in rural service they had no concept of what constituted a fair and representative description of tribal communities and what did not.

Like many other health systems, the Indian system is characterised by the fact that a majority of doctors come predominantly upper class, forward caste communities. A quick eyeballing of the ARSICON participant list will confirm this. If such doctors are truly desirous of understanding poorer, less privileged communities in order to help them then they need a basic theoretical framework in which to situate their understanding, This would be similar to the framework of anatomy, physiology, pathology and pharmacology which helps them understand surgical problems and techniques. Such a framework would include elements of basic sociology, anthropology, economics and political science and would help doctors navigate through the complex socio-political landscapes in which their patients are located.

Adding more theory to the MBBS course may seen to be an unfair demand at first. A quick review of the existing curriculum would reveal however that medical students are anyway burdened with a lot of complex biomedical theory which they have no use for. Why would anyone need to know the exact steps of the Kreb’s Cycle? Or the molecular structure of aminogylcosides? My suggestion is to replace this with basic social science theory instead.

Practicing here in Sittilingi it is ironical that when a young tribal woman is brought in after consuming poisonous plants containing cardiac glycosides I can elegantly describe the exact effect of the toxin on Na-K- ATPase cellular pumps but fumble when attempting to explain the social factors that caused her to attempt suicide in the first place. Neither can I fully explain the fact that pharmaceutical companies have decided that the specific antidote (digoxin Fab fragments) need not be marketed in , a country where there is a large incidence of such poisonings. Such social and economic understanding would enable me to intervene much more effectively at both the individual and population level instead of merely being able to impotently explain the exact physiology behind her cardiac arrhythmias as she dies before my eyes.
Posted by Lalit Narayan at 6:00 PM No comments: Links to this post 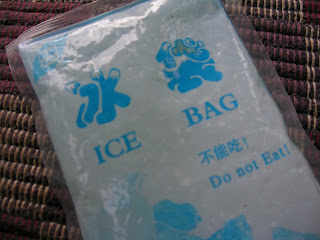 In this era of globalisation in comes as no surprise to me that the artificial icepacks we occasionally use at our hospital have been manufactured in . However I realise that a great many linguistic and cultural barriers have yet to be crossed when the instructions on the cover read as follows.
Operation Instructions
Posted by Lalit Narayan at 5:56 PM 1 comment: Links to this post

What I have been up to

I function as the lead on www.communityhealth.in , a wiki website attempting to capture the realities of community health and the Health For All movement in India. Do check it out.

I also act as webmaster for the Tribal Health Initiative. www.tribalhealth.org

This is a Flickr badge showing public photos from pixel_monkey. Make your own badge here.